Posted on May 1, 2012 by blitzbombcensusmaps

This blog post summarises how we are transforming paper maps of from the Bomb Census into interactive digital maps through a process known as geo-referencing.

We start with scanned paper map which is stored as a digital image that is transformed by adding a geographical reference system. 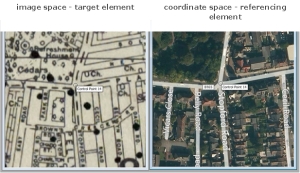 The bomb damage maps are matched to a contemporary map that has a set of spatial coordinates (eg open street map, bing maps, virtual earth) by matching a point location in the historical map image to a location in the contemporary map. This process is known as creating control points. The control points facilitate the geo-referencing process and leads to the  georegistration of the historical map image. The image above shows two control points which identify the same location in both the target image and reference map, as an example.

The number of control points required will depend on the mathematical model that you use to conduct the transformation but essentially (1) use as many as possible ; (2) distribute them evenly and (3) make sure you have them placed at the edges of the target map.

Once a sufficient number of control points have been identified the target image (the bomb census maps) can be transformed to match the coordinate system of the reference map. This transformation enables the target bomb maps to be rotated, scaled and shifted in order to re-project the bomb census maps in with a set of geographic coordinates. The initial results are shown in the sample image below. 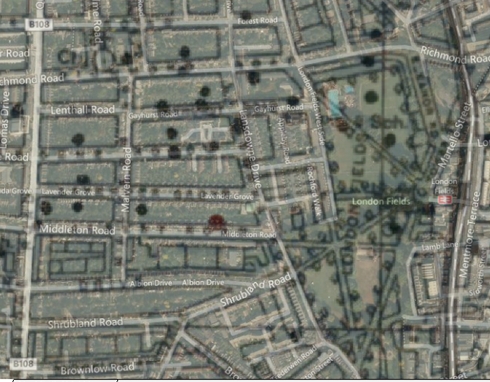