About the data we are using (part 1): How we selected the archive map data to use

Posted on April 4, 2012 by blitzbombcensusmaps

To develop a manageable set of data  we had to select from a vast array of archive information. This blog post describes the process of narrowing the focus by selecting a time period, a region and a sub-set of maps.

The Stepping Into Time  project is now using the Bomb Census Maps as the primary data in the tools we are developing (see previous post on ideas to help prevent manifestation of  IPR issues). The maps are part of  an extensive array of material collected during the Bomb Census Survey 1940 to 1945, organised by the Ministry of Home Security. The records are held in The National Archive (TNA),  and we will be using the maps with a non-commercial education licence. This blog post describes how we selected the archive data that will underpin our tools.

Examples of archive documents from the Bomb Census Survey 1940 – 45: The National Archives

Due to the sheer volume of records, photos, documents and information collected during the Bomb Census Survey – the project had to carefully select data to prevent  information overload which might mean we miss our completion deadlines. For this reason we spent some time before Christmas at the Archives with one of TNA’s map archivists Andrew Janes. The image shows a snapshot of the types of documents collected during the bomb census. The array of information had the purpose of providing the government with a complete picture of air raid patterns, types of weapon used and the damage caused  (TNA, 2011).

To select a manageable data set we first decided to restrict the time period of the project to the period of the most intensive bombing  known as The Blitz. The word ‘Blitz‘ is derived from the from the German term ‘Blitzkrieg’ (lightning war) and is associated with a period of continued aerial bombing by the Germans on Britain  (Imperial War Museum, 2011).  The Blitz started on the 7th September 1940 and continued until the spring of the following year. The  maps in the archive do not completely align with the time period of the blitz so there is a slight mismatch but the reporting period we are investigating is between October 7th 1940 and June 1941 as this is the period in which data were collected.

During the war Britain was divided into Civil Defence Regions – of which there were 12.

London was recorded as region 5 and was sub-divided into 9 Civil Defence Groups. The project will be exploring Bomb Census Maps from across Region 5. As shown in the picture to the left (please excuse my rather poor photography !).

The other regions were as follows:

The primary focus of the project is not about digitising maps but about clustering different data. Therefore having selected a time period and a study area the final step was to select which of the archive data to use. We have selected to look at two types of map from the HO193 map series in order to (1) obtain an aggregate view of all the bombs dropped during the period of interest and (2) see in detail the first week of the reporting period. 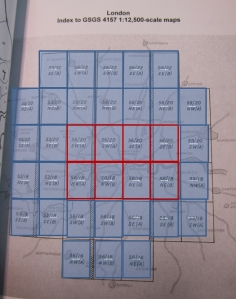 Data collection map sheets for the weekly plots of the first week.

There are aggregate maps for daytime bombings but the records or not complete as the maps for a 3 month time series appear to be missing within the archive. As we wanted to use as complete data as possible (withing the constraints of what data is available to use) and most of the bombings were at night we selected to use maps of aggregate night bombings which covers a large proportion of the time period known as the Blitz.

We had to limit the number of maps scanned for the weekly plots because for region 5 and the period of interest there are over 500 map sheets in just the HO193 map series.  It would not be possible to geo-process this number of map sheets with the resources and time available, therefore we selected to use the 8 map sheets that approximately represent Central & East London as highlighted in the image.

Watch the blog for forthcoming blog posts describing the detailed information about the two different bomb maps  (HO193/13 and HO193/01) and the other data we are clustering them with.

This entry was posted in data, project details and tagged about the project, Bomb Census Maps, historical maps, The National Archives. Bookmark the permalink.

4 Responses to About the data we are using (part 1): How we selected the archive map data to use